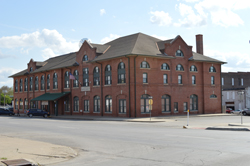 In 1845, John Patee, a native New Yorker, traveling west selling agricultural machinery, purchased two quarter sections of land and had them divided into lots and added to the town of St. Joseph. These additions, which extended south from Messanie Street to Mitchell Avenue, and east from Sixth Street to 13th Street, were known as Patee Town. In May of the same year, he opened the first drugstore in St. Joseph, and by 1860, he was regarded as the wealthiest man in St. Joseph. In 1855, he gave the city a square block of land for use as a park and market place. The land was to “the public for public use forever” and was initially intended for use as a market for products such as hay, wood, and country produce.

In 1905, a movement began for a new market house. On November 12, 1906, a major appropriation to build the first story of the new Patee Market House was approved and a building permit with a $16,000 value was issued the next day. An additional $25,000 was approved in a bond election and another permit was issued in March 1909. The building was completed later that year.

A fire destroyed part of the building in 1911. The building was repaired and in 1916, the Social Welfare Board moved to Patee Hall where they have remained. Patee Market has seen a number of different uses throughout history including housing Associated Charities, the Tuberculosis Society, the Visiting Nurses Association, Polyclinic, and the Board of Health laboratory. During WWII, Army and National Guard units used the second floor for drill, recreation, and quarters, and in 1942, it was designated as an emergency center.

Public health offices moved to Patee Hall in the late 1960s. In 1966, a recommendation to abandon Patee Hall was made due to the need for extensive repairs and the lack of money to make those repairs. In 1968, a proposal was submitted recommending the razing of Patee Hall to make way for a new health center.

The Health Department’s home health nursing division and clinic services had been in different locations over the years. The nursing services were once located in the Corby Building, and later in City Hall. In 1976, the home health nurses and clinic nursing services were combined at Patee Hall. Municipal Court was moved from City Hall to Patee Hall in the early 1970s where it remained until it was moved to the Buchanan County Courthouse in the early 1990s. A youth recreation center, funded by donations, opened on the second floor in January 1977.

After years of controversy over what to do with the building and where to relocate the city’s health services, rather than relocate or construct a new facility, the City Council decided to proceed with renovating Patee Hall. Work was completed on the northern half of the building, housing the Public Health Clinic and Women, Infants, and Children (WIC) nutrition program in February of 1994. The southern half of the building was completed in August of 1994, for the use of the Social Welfare Board. In May of 1996, the northern half of the second floor was renovated and became the home of the Health Department administrative offices and the environmental services division. In September of 1995, the Youth Health Center (currently, Northwest Health Services Youth Dental Clinic) opened its doors in the southern part of the second floor. Extensive aesthetic renovations, as well as a few interior structural enhancements were completed in 2015, refreshing the facility.

On May 22, 1995, the City Council passed a resolution changing the name of the building to Patee Market Health Center, blending the original use name of the building with its current use and function. The St. Joseph Health Department is a city Health Department which serves the citizens of St. Joseph, as well as residents of Buchanan County. All of the health services now located in the building serve as primary care providers for various health needs or as a referral source to other agencies.

In addition to the Health Department, the building also currently houses the Social Welfare Board and the Northwest Health Services Youth Dental Clinic. It also serves as the local extension of the Missouri Department of Health and Senior Services and the United States Public Health Service.