John W. duty, 45 years old, died as a result of traumatic injuries he received in a vehicle accident in the 2800 block of Jules. Officer Duty had been working traffic enforcement on the morning of September 12, 1991, and stopped a vehicle for speeding.

Officer Duty, a 25 year veteran of the department, was well known to the children of St. Joseph as "Officer Friendly" and his primary duties were with the School Safety Program. Officer Duty had been a detective from February 1968 to January 1974. In January 1974, Officer Duty transferred to the Traffic Division and served as a Traffic Officer until the unit was disbanded in 1984. Officer Duty was survived by a wife and three children. 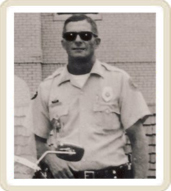